By Autopark Chrysler Jeep on July 24, 2014 in Lifestyle

When the financial downturn reached its zenith in 2008, the automotive industry experienced its own crisis throughout the following two years. Consumers did not seek new purchases, particularly ones as significant as an automobile – it’s a long-term investment, after all. As a result, many companies downsized, laid off, and turned to the government to buoy them. The damage was done, though not irrevocably, so automakers began to develop new methods to streamline their processes and create fresh designs to reinvigorate sales.

Politics aside, it is really a story of perseverance; a narrative that gives insight to the American spirit. Car sales have steadied, following a consistent rise across the nation for multiple quarters. People are returning to work, and we have veritable deluge of new models among which to choose. There is no brand that better represents this turn-around than Chrysler.

Walter Chrysler started his company in 1925. His commitment to excellence and progressive thinking propelled the company into its position as one of the “Big Three” American automobile companies. Innovative vehicles like the 1941 Chrysler Newport took the world by storm, earning critical acclaim for its designs and features. Over decades this company became a beacon of what it means to be American.

Now, the automaker known for its disparate, yet advantageous, qualities – muscle, elegance, class – has managed to become a new standard bearer for the midsize sedan. We want to formally introduce you to the… 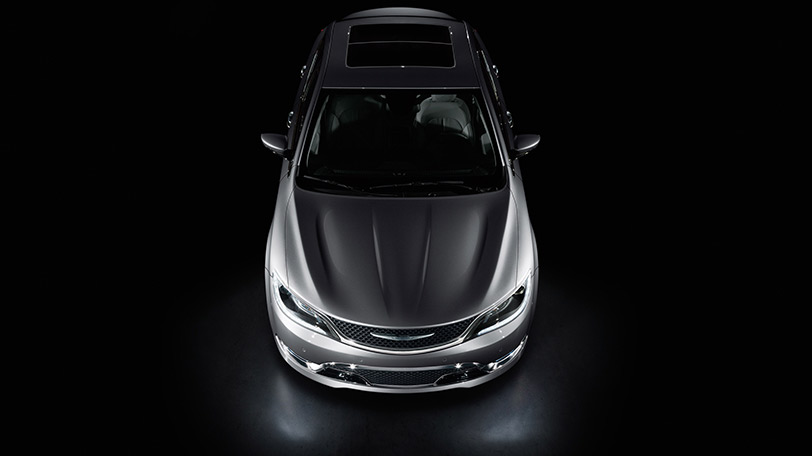 Our test-drive experience allowed us to savor the upgraded 2015 Chrysler 200 C Sedan, which offers what “luxury” brands seemingly tout as exclusively theirs. Drivers can add a copious number of features to enhance the experience behind the wheel at a cost far less than its German and Japanese competition. It is upon this platform that Chrysler expects to convert buyers, and reviews have typically confirmed this attempt could be the company’s most successful.

If you have any preconceived notions of a Chrysler vehicle, take a moment of Zen to clear your mind.

Looking at the vehicle head-on, its visage truly demonstrates why the automaker has taken on the slogan of being “America’s Import.” A more slender honeycomb grille curves upward, encapsulated by a set of HID headlamps LED daytime running lamps. Set below a prominent front fender is an expanded honeycomb front air dam – bookended by LED fog lights. Holistically, the 200 has a seemingly devious look, for it knows its own capabilities and awaits your discovery of them. 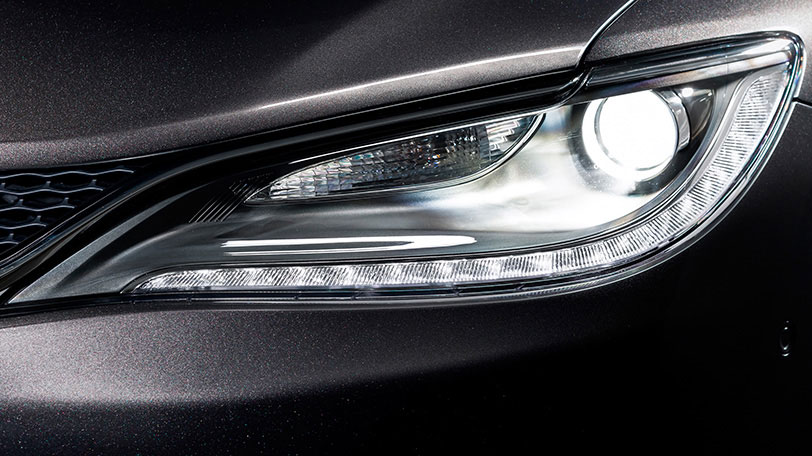 Robust lines, sharp angles, and a wide stance accentuate its newfound prowess. The hood crests and curves, affording the car an appearance of perpetual motion. This architecture is best described as strong posture; everything is set where it needs to be for maximizing aesthetic appeal and performance.

Pronounced lines continue along the 2015 Chrysler 200’s profile, enhancing the aerodynamics and the sporty look. The meticulously engineered curvature is recognizable, even from a distance, by the shadows and shine cast from end to end. 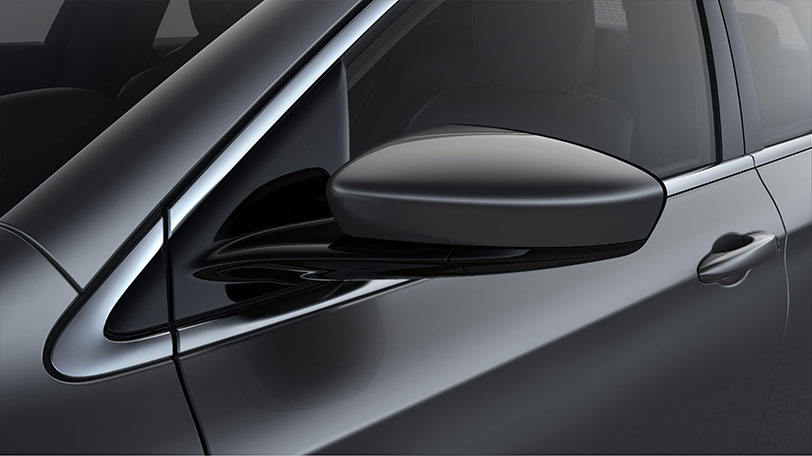 The tail end naturally sits a few inches higher. It replicates the same robustness as the front end, also lending it a more prominent stature. Dual exhaust pipes, sharply angled taillights, and the iconic Chrysler emblem are the primary features of this well-designed rear. Though purely American, there is a bit of German influence in its makeup – take a close look, and you’ll see it. 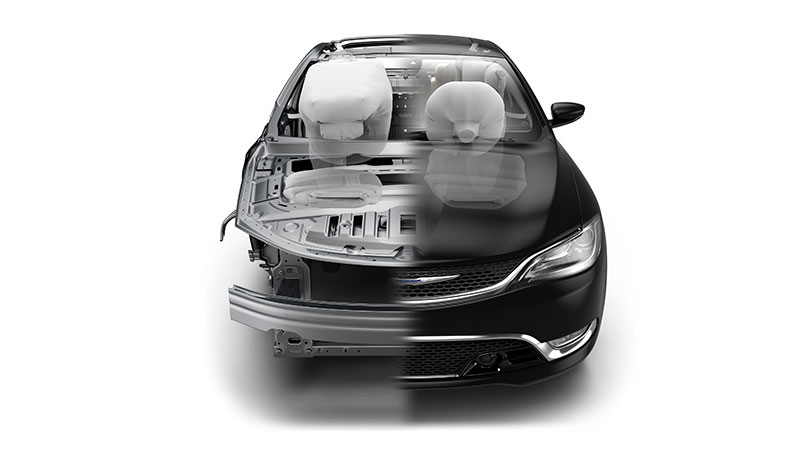 “America’s Import” isn’t just a slogan. It’s the culture at Chrysler, which is evident behind the wheel. For a midsize sedan at a great price, the 2015 Chrysler 200 C offers an array of features and options that our team did not anticipate. It presents a new benchmark in cost-efficient luxury that refuses to undermine quality. 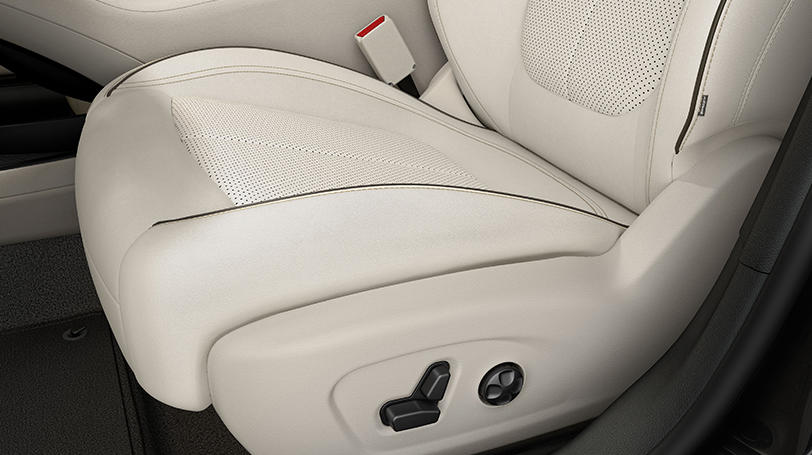 Plush leather seats provide tremendous comfort: they are supple, yet not a doughy texture that leaves drivers sore following an extended drive. As with most modern cars, there are multiple controls to adjust the seat for optimizing ergonomics. Other leather accoutrements complement the interior, augmenting the elegance of the cabin. In the model we drove – as displayed in the picture below – the soft grey leather creates a gorgeous two-tone for the cabin.

In addition to the classic granite that colors the dash and doors, wood-grain-colored plastics are strategically placed, as well as chrome accents that line clusters and panels. Every piece contributes to an overall sense of sophistication. 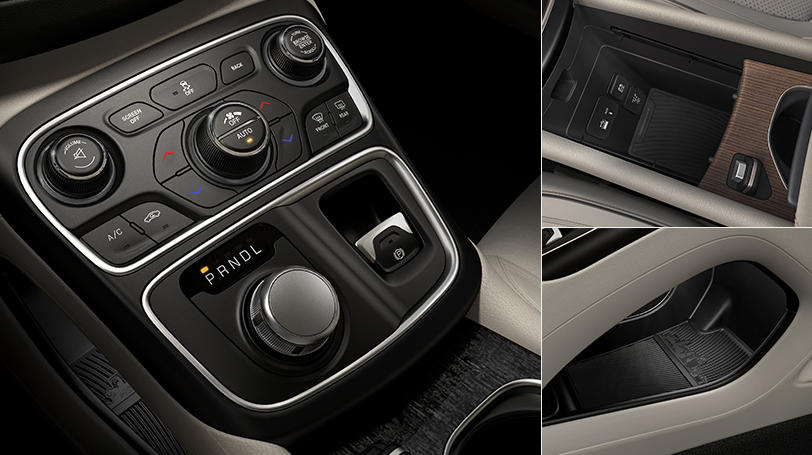 While most luxury brands make a concerted effort to flaunt their technology with a menagerie of clusters, centers, panels, and buttons, Chrysler prefers a simplistic approach …

Climate control is operated and adjusted by a few buttons and a knob; a rotating dial places the car into gear, which is set next to a one-push parking brake. That, ladies and gentlemen, is your center console.

A large, crisp infotainment screen offers a multitude of functions that are delineated in a manner that lessens confusion and vastly reduces any layers needed to store controls. With one or two touches of the screen, a driver of any technical aptitude can set navigation and radio stations, or make phone calls and locate the nearest gas station.

The steering wheel has a few buttons that operate vital controls: cruise, music, driving information, and phone calls. There’s nothing complex; it’s all very intuitive and allows for quick acclimation. 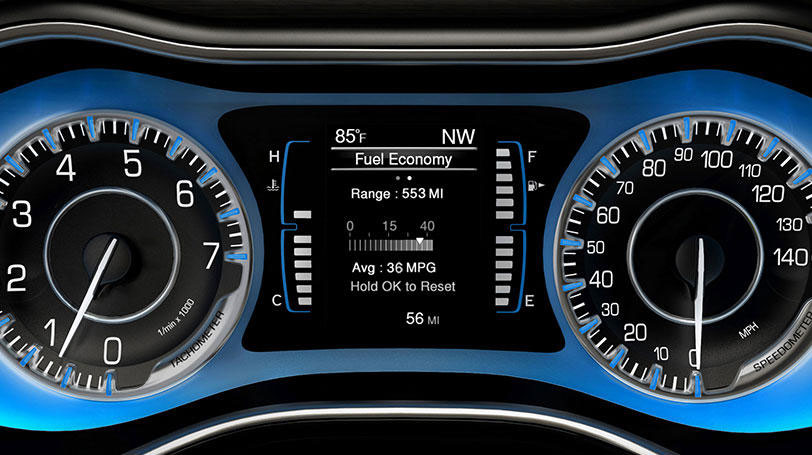 What may be the most striking feature on the interior is the meter cluster. It displays some digital driving information through which you may scroll using the steering wheel controls. All of the numbers and speed markers are highlighted by a white glow that peers out from a gorgeous dark blue contrast – a perfect hue.

With past reviews – as has been done in other writers’ reviews –we’ve referred to the test drive as an “experience.” Many drivers have become accustomed to suspension systems that completely remove the feeling of the road, and all of us are guilty of feeling enamored with autonomous safety features. In a 2015 Chrysler 200 C Sedan, the connection felt is with the road; you drive this car just as its manufacturer intended. 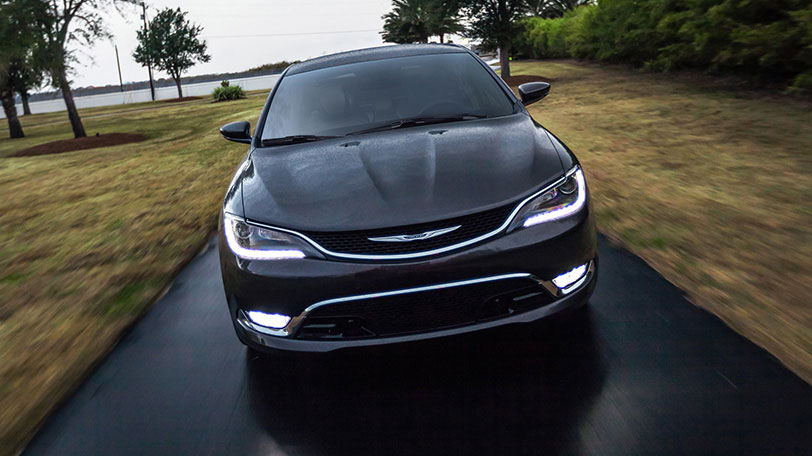 Turning the dial to “D” sets the engine to a soft idle; however, the 200’s muted exhaust note does not indicate a subdued powertrain – quite the opposite. Beneath the hood lurks a 3.6-liter V6 with the capability to produce 295 horsepower at 262 lb.-ft. of torque. For a midsize sedan, this engine pulses with just enough juice to thrill adrenaline junkies. Luckily for the average folks, the accelerator has a natural resistance for fuel-efficiency checks-and-balances.

On the highway, it performs rather well. Drivers are not completely removed from the road, so there’s ample feedback without making the trip disruptive. The 200 C’s design, with thoughtful construction and placement of A- and B-pillars, opens the car to surrounding environments and leaves few blind spots. It affords a feeling of comfort, and there’s always the added measures of current safety features and driving assists should you feel the need to engage them.

Serpentine back roads are where this car thrives. Proper acceleration and deceleration make driving fun again, and if you’ve lost that feeling, a Chrysler 200 C can help you rediscover it. While the Germans tout “quattro,” Chrysler does not need nomenclature assigned to systems, for the car’s components work synergistically to meet the same ends – a vehicle that clings to the corners without the unease of sensing a lack of balance.

As the test drive came to an end, something about the 200 emerged from the haze of excitement felt in a new car: its brakes. It took time to acclimate to the 2015 Chrysler 200 C sedan’s brakes as they were a bit more sensitive than our own vehicles; however, with the many brands and styles of brake pads, this should come as no surprise. Throughout the route, we naturally became proficient at knowing how much pressure to apply in various conditions.

Pulling back into the lot, our test route allowed us to glean a lot of insight about the car. From the advanced technology to steering efficiently, learning to drive this car takes very little effort. Young adults who think Chrysler is tailored for the elderly should take notice, and it will surprise them with its power. Professionals and older adults who assume a car priced so well couldn’t possibly offer the luxuries they’ve earned should get behind the wheel, and the 200 will soon satisfy their expectations.

The 2015 Chrysler 200 C sedan isn’t built to compete against a Ferrari or Rolls Royce. Chrysler produced it as an alternative, an offering to “average joe” who wants to enjoy the fruits of his labor without a price tag equivalent to multi-bedroom homes. It has enough styling to make people take a second look, but, more importantly, it is spacious, comfortable, safe, and fun – isn’t that what matters most?