By Autopark Chrysler Jeep on March 17, 2014 in Lifestyle

There are many reasons to love the Jeep brand. Each model, though of the same line, offers unique advantages with regard to features and capabilities. We do, however, have to admit the unwavering loyalty of Jeep Wrangler drivers. This coterie of off-road enthusiasts display their love of the model through official groups – almost like fraternities –, decals, and websites all dedicated to this reliable machine. The Wrangler is also the closest sibling of the World War Two warrior known as Willy’s Jeep. 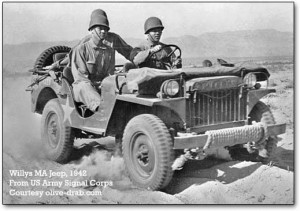 While not officially a part of the Allies, the American government realized that it rested on the cusp of military action. In June of 1940, the three major U.S. carmakers were asked to design a one-quarter ton light reconnaissance vehicle. Bantam, Willy’s, and Ford submitted their bids, and this automotive triumvirate collaborated to develop the first prototypes of the Jeep.

The American government awarded Willy’s the contract to develop 16,000 units of its version of the vehicle in June, 1941. It would cost the government $738.74 for each produced. 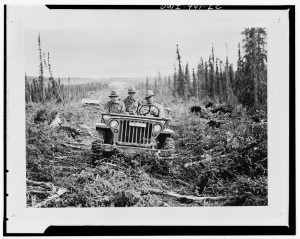 When the United States declared war on Japan, the Jeep stormed the shores alongside American troops and quickly developed a reputation for being tough and reliable. It was utilized as an ambulance, cargo carrier, fighting vehicle (with machine guns mounted to it), and long-range land patrol. Eventually, while set up at bases on foreign lands, soldiers discovered the Jeep’s ability to work as a light tractor with a blade attached to the front. 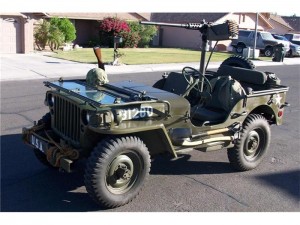 Ernie Pyle, a famous war correspondent, said, “[The Jeep] did everything. It went everywhere. It was as faithful as a dog, as strong as a mule, and as agile as a goat. It constantly carried twice what it was designed for and still kept going.” He and American soldiers also noted how easily the Jeep fit onto transport aircraft and military gliders. Many were even adorned with special wheels that allowed them to drive on railroad tracks. The Jeep’s ability, undoubtedly, contributed to America’s victory over the Axis of Evil.

With such a rich history, isn’t it time you stepped behind the wheel of a Jeep? We at AutoPark Chrysler Jeep have an extensive inventory just waiting for you to discover the fun and reliability of our vehicles. A group of knowledgeable brand specialists are waiting to help you find the perfect Jeep.

There is no definitive answer for the origin of the name “Jeep.” One of the most pervasive claims is that it was derived from the military term “general purpose.”