By Autopark Chrysler Jeep on December 26, 2013 in News

The Chrysler 200, since replacing the Sebring just a few years ago, has substantially improved sales – particularly following the “Imported from Detroit” Superbowl advertisements in 2011. This does not mean, however, that Chrysler has abandoned its efforts to make its models more appealing; in fact, it has done quite the opposite. Instead of merely modifying the current shell of the 200, a vastly more sleek and attractive design will be unveiled at the 2014 Detroit Auto Show. 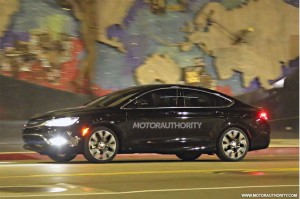 Much of its reveal is being withheld until next month’s auto show; however, a few photographers were able to capture a few images during a private night-run hosted by Chrysler.

The 2015 Chrysler 200’s curvaceous body captures an elegance typically reserved for overpriced “luxury” cars, creating a visually striking flow from hood to tail – with a sharper angle toward the rear. To capture the design in a single word, one would say it looks athletic. The chic, sharply-cornered grill complements its angled, slim LED headlights that further exemplify Chrysler’s efforts to create a modern style.

Though the exterior’s quality has reflected a vision of Audi-like proportions, what Chrysler placed under the hood has yet to be seen. Some speculate the base model will boast a 184-horsepower Tigershark 2.4-liter four-cylinder engine. Power and gas efficiency: Nice.

Once details are released in January at the Detroit Auto Show, we will make certain to follow-up on the gorgeous 2015 Chrysler 200.

If you have any questions or comments, please do not hesitate to contact us at comments@leithmarketing.com.

Happy Holidays from the Leith Family!
2013 Comes to a Close: New Beginnings Await!