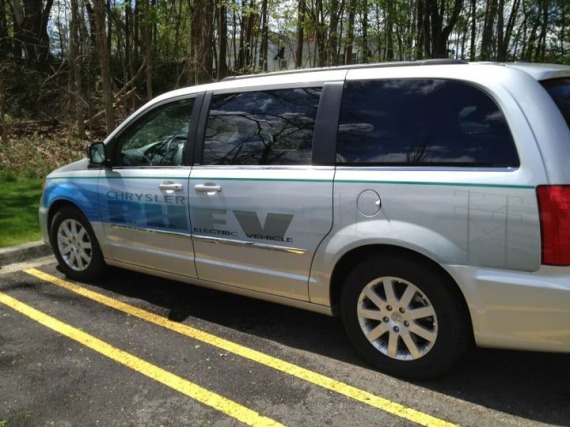 Chrysler has pulled back the curtain and announced that it will make the first hybrid van in the United States. Speaking at a lovely little shindig called the Paris Motor Show, CEO Sergio Marchionne said that the company will launch a plug-in hybrid electric version of the Chrysler Town & Country toward the end of 2015. The Town & Country is one of three models that Chrysler produces. No automaker has ever made a hybrid minivan available to the public in the U.S.

This is cool for two reasons: not only would a hybrid minivan be a first, the fact that this is a PHEV is even more striking. PHEVs are the more modern, progressive descendants of the original hybrid vehicles that came on the scene a decade or two ago. PHEVs have the unique ability to run solely on electric power which is enormously helpful in improving fuel economy. Chrysler says that the new minivan would have MPG numbers on par with the Prius V, which is to say 44 city and 40 highway for a 42 MPG overall.

That’s extraordinary because a minivan weighs a lot more than a Prius V. Minivans have typically been known as gas hogs using costly six-cylinder engines even as most models have adopted turbocharged four-cylinders. The large bodies and weight requirements of minivans make a turbo-four inadequate. For this reason, a PHEV engine is an excellent choice.

Chrysler will essentially have this section of the market to themselves since no one else has a hybrid van. Most automakers are using PHEV tech to make gas-guzzling SUVs more efficient, so it’s kind of a wonder that no one has made the logical next step and brought minivans into the fold.

With small business increasingly looking to minivans and commercial vans as transportation vehicles, a more efficient PHEV with possible tax breaks could be highly attractive. It’s basically two revenue boosts from a single vehicle so we have to commend Chrysler for thinking strategically.

In the meantime, we want to give a shout out to those of you in Cary; if you’re looking for a Chrysler dealership or any of our other brands, stop by!