By Autopark Chrysler Jeep on May 30, 2014 in Lifestyle

There are few names in American culture that conjure thoughts of wealth and opulence than that of Rockefeller. That is, in large part, due to the generosity and vision of John Davison Rockefeller, Junior – often referred to as “Junior” to distinguish him from his father. He was the only son among the five children of John D. Rockefeller, the co-founder of Standard Oil. “Junior” went on to become a major American financier and philanthropist.

It is because of John D. Rockefeller, Junior, that much anticipation surrounds the Vancouver Collector Car Show and Auction. The 1946 Chrysler Town Car Limousine, commissioned by Rockefeller, is set to be auctioned off among an entire lot of rare vehicles. This custom-built model was modified by Derham – it is a one-off vehicle that boasts a dual cowl and suicide doors at the rear, as well as a divider window, dual heaters, vanity mirrors, and ample wood trim. 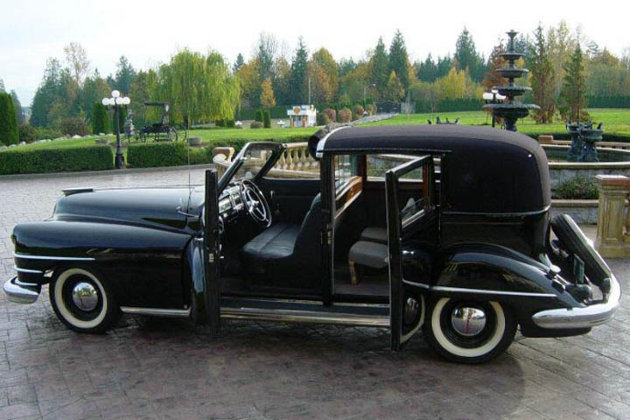 The car still has the chrome trim and white-wall tires that made this model iconic. An eight cylinder engine and three-speed hydromatic transmission, both restored, sit beneath the mile-long hood. This 1946 Chrysler Town Car Limo is truly distinguished. The listing for it at the Vancouver Collector Car Show and Auction has no price listed, but considering its history and restoration, it likely will have a hefty cost.

And for those a bit hesitant to purchase a classic vehicle like this, the listing also offers a second rebuilt, original spare engine that comes on a separate rolling stand.

We will be sure to watch for and update you with the sale should final auction prices be listed. In the meantime, there are plenty of great 2014 Chrysler models waiting for you down at AutoPark Chrysler Jeep. We have a staff of wonderful brand specialists waiting to show you our inventory – and possibly help you find the next great American car to be sold at auction one day.