By Autopark Chrysler Jeep on June 27, 2014 in Lifestyle

One of the most commendable – and sometimes destructive – qualities of human beings is ambition. We all have a natural inclination toward a subject or idea or industry; it compels us to employ imagination, work harder, and take risks so that we may reach current goals and set new ones. Andy Green has a proclivity for speed, which is something upon which he’s built a legendary reputation.

Andy Green was a British Royal Air Force fighter pilot. The RAF promoted Andy throughout his years of service, and he eventually earned the rank of Officer Commanding Operations Wing. His experience in jets ranged from the F-4 Phantom to the Tornado F3. It should come as no surprise, based on his military experience, that Green was the first person to break the sound barrier on land and become the holder of the World Land speed record (763 MPH).

He accomplished this in 1997. Now, he wants to break his own record.

Andy “Dead Dog” Green began collaborating with Richard Noble again to break the 1,000 miles per hour mark in Bloodhound SSC’s land racing car. At this point, you may be asking yourself this question: “How powerful must a land vehicle be to reach that speed?” The jet engine and rocket that will power this car will produce the equivalent of 135,000 horsepower; in other words, approximately 180 Formula One cars combined.

The next question is a logical progression of thought: “How do you stop a land vehicle that is able to reach that speed?” When the car’s speed reaches its zenith, air brakes and parachutes will reduce the speed to 160 MPH. Mechanical brakes must manage the rest of deceleration until the car comes to a full stop. Its wheels are custom-built and fully steel, and they are designed for minimal traction like a Pinewood derby car. That means braking must not lock the wheels, or Green risks catastrophe. 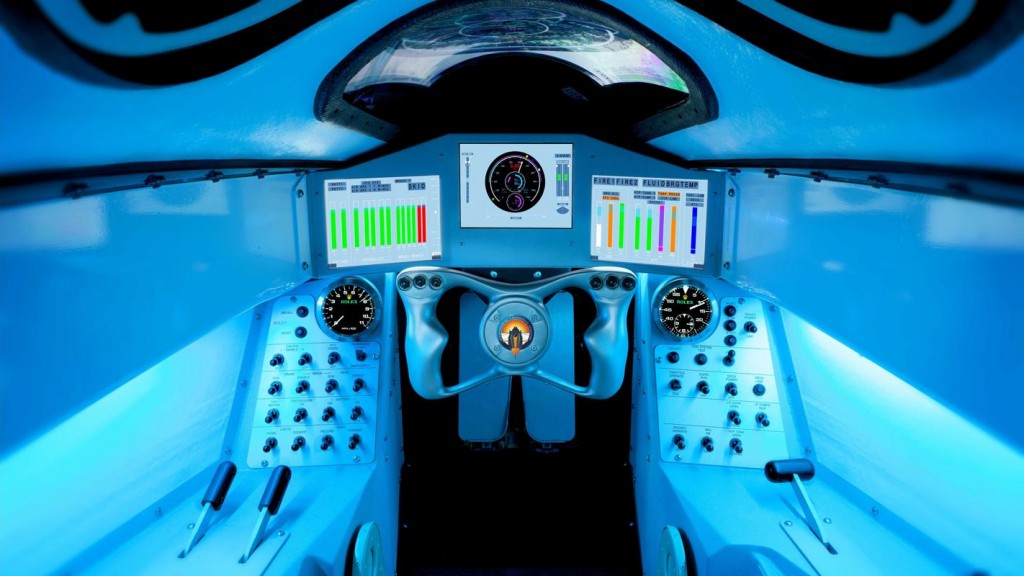 Inside the cockpit is a complex platform of switches and screens that will feed Green all of the information he needs to safely make his run. From his molded carbon-fiber seat, sculpted to meet exact specifications, Green will use all of the necessary tools to ignite the rocket and, more importantly, the braking mechanisms. Should there be any electrical failures, the Bloodhound has a failsafe of manual overrides.

Should curiosity strike you about what it would be like inside this vehicle as it reaches 1,000 MPH, realize that the noise would sound like a constant gunshot and temperatures will exceed 95 degrees Fahrenheit. If that dissuades you but watching someone else experience it still sounds interesting, you’ll have to wait until 2016 when Andy Green attempts this feat in the South African desert.

Here is a closer look at the inside of the Bloodhound SSC:

You can read more about Andy Green and his Bloodhound in this Motoramic article.

The Story of Andy Green and the Bloodhound was last modified: December 9th, 2014 by Autopark Chrysler Jeep