By Autopark Chrysler Jeep on March 2, 2015 in Videos 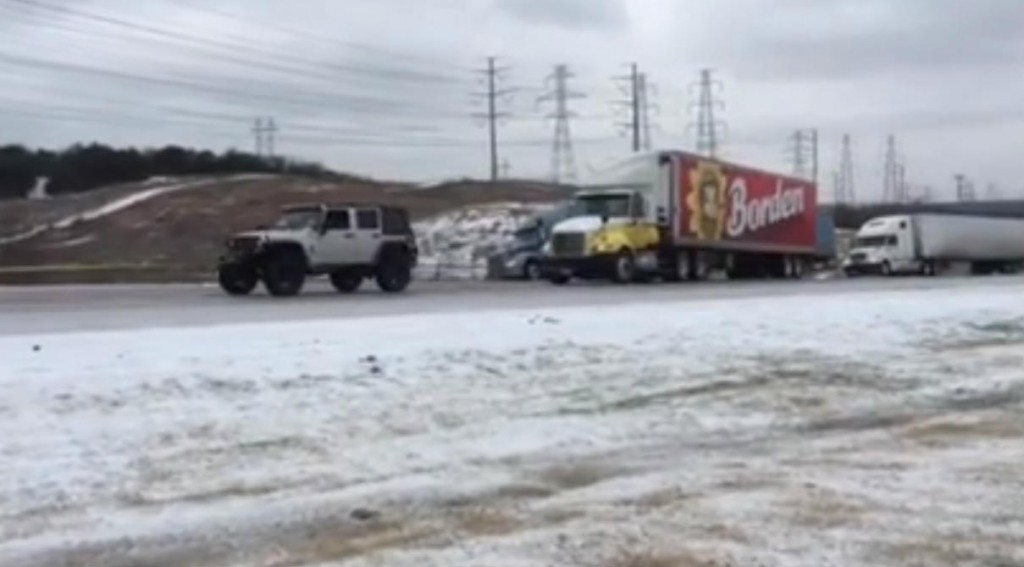 Snow, right? While most people were slipping and sliding during the Triangle’s annual freakout known as February, perhaps you were one of the intrepid few who ventured out on the icy roads. Did you use our guide for driving in snowy weather? Hopefully it helped. If you did not, we have a pair of videos to show that Jeeps are equipped to handle tundra conditions without a problem.

The first shows a small band of Jeeps doing what doesn’t seem possible or even advisable: they pull an 18-wheeler out of a ditch that it has slid into. The Chisholm Trail Jeep Club looked at a semi-tractor trailer that gotten itself stuck and thought, “No problem.”

Keep in mind that an unloaded rig weighs about 20 tons. Loaded up it can be more like 40.

That’s an astonishing amount of towing capacity. Even more formidable would be getting the traction necessary, on icy ground no less, to pull it. Granted, it appears that the semi was able to add its driving force, and thus wasn’t a completely dead weight.

According to the group’s Facebook page, this was just one of many big rigs and regular vehicles they rescued during the month’s wintry conditions. While the rest of us were double-fisting hot cocoa and diving deep into our Netflix queues, these people were heading out to make sure no one was stranded.

If that isn’t the example of good will and kindness that people need to see, we’re not sure what is.

Something else you might appreciate is this snow comparison of a Renegade Trailhawk and a Wrangler. The Renegade is the new kid on the block trying to hang with the established Jeep. That said, the Trailhawk is an excellent package to work with. If you’re curious how these two fare in the snow, this is the video for you.

Watch This Squad of Jeeps Tow a Snowed-In 18-Wheeler With Ease was last modified: March 2nd, 2015 by Autopark Chrysler Jeep